Finger Lakes Library System will be undergoing an internet provider change on Wednesday, December 7 from 9:00 until 11:00 am. During this time, patrons will not be able to search the online catalog, access their accounts, place holds, or connect to the TCPL WiFi. Access to the OverDrive/Libby digital download service will not be affected. Thank you for your patience!

Serial Box Presents: Your Portal to Another World with The Writers Room from The Vela: Salvation 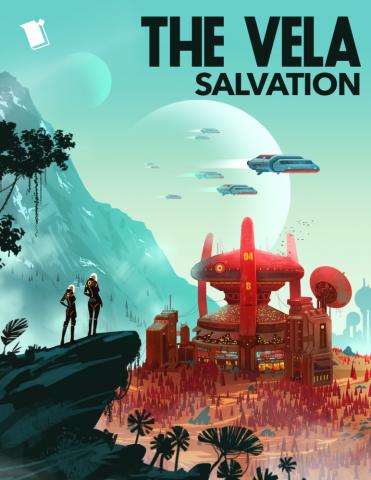 Join TCPL and Serial Box for the final event in our series of live readings and Q&A's with their authors. This event features The Vela: Salvation with authors Ashley Poston, Maura Milan, Nicole Givens Kurtz, and Sangu Mandanna:

The solar system was dying. Plants turning cold. It was only a matter of time until all of humanity perished among the stars.

That is, until soldier-for-hire Asala Sikou stumbled upon a solution that could do more than save the world—it could open the door to a new one. A wormhole to a different galaxy. A chance to start over. The last chance. And Asala takes it, betraying Niko and the others who trusted her. Branded a traitor, she must reckon with the consequences of her actions—and those of her estranged sister, Dayo, who is desperate to return to the world Asala unwillingly stole her from.

In the aftermath of the Battle of Gan-De, Niko remains on the other side of the wormhole, condemned to die with the other ships who didn’t make it through. But Niko wants more than mere survival. They want revenge. Which is why Niko risks everything—including their life— to find another way to cross the divide, with one goal in mind: finding out why Asala thought it was right to leave her behind.

But space is as treacherous as old friends turned foes. When a new threat starts to show its face, everyone must race to protect themselves in a world they thought was safe. Asala and Niko are caught in the center of a fight they never saw coming…and one they can only win together.

All attendees at this event will get access to Season 1 for free with a Serial Box account. Learn more at Serial Box online.

This is free and open to the public, and will be offered via Zoom.

Serial Box offers addictive, well-produced sci-fi and fantasy that you can listen to or read, delivered to your device in bite-sized chunks. Learn more at Serial Box online.

Ashley Poston graduated from the University of South Carolina with a BA in English, and went on to work at both Kodansha USA and Bloomsbury Publishing. But the dazzling bright lights of New York City couldn’t keep her away from old country roads, so she moved back home to pursue a full-time writing career.

Her books have been on the Indie Next List multiple times, and have been featured in Teen Vogue, Seventeen, Entertainment Weekly, Hypable, and Buzzfeed, among others. She has also been a Goodreads Choice Finalist in 2017 for Geekerella, and a semi-finalist for The Princess and the Fangirl in 2019. She also has a critically-acclaimed space opera series, the Heart of Iron duology, which was named on 2019’s Rainbow List.

Maura Milan currently resides in Los Angeles, where she can be found hanging out in cafes and drinking matcha lattes. In her free time, Maura enjoys watching Korean dramas and hanging out with her schipperke, Thor, who she believes should become a professional comedian.

Nicole Givens Kurtz’s short stories have appeared in over 40 anthologies of science fiction, fantasy, and horror. Her novels have been finalists for the EPPIEs, Dream Realm, and Fresh Voices in science fiction awards. Her work has appeared in Bram Stoker Finalist, Sycorax’s Daughters, and other fine publications. She's a member of SFWA.

Sangu Mandanna was four years old when an elephant chased her down a forest road and she decided to write her first story about it. Seventeen years and many, many manuscripts later, she signed her first book deal. Sangu now lives in Norwich, a city in the east of England, with her husband and kids.

If you have any questions, please contact Sophia McKissick at smckissick@tcpl.org.