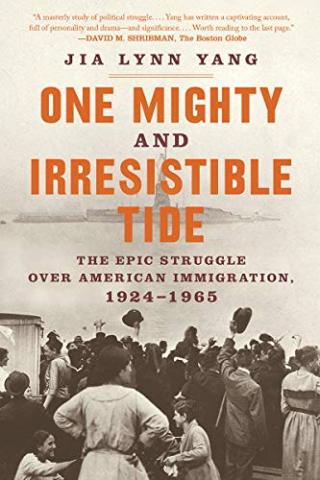 After a long hiatus, TCPL's Nonfiction Book Club is back! Led by Asia and Woody (you may remember us from True Crime Book Club), this club will meet three times a year and read a wide variety of nonfiction. This summer, we'll be reading One Mighty and Irresistible Tide by Jia Lynn Wang.

A "powerful and cogent" (Bethanne Patrick, Washington Post) account of the twentieth-century battle for immigration reform that set the stage for today’s roiling debates.

The idea of the United States as a nation of immigrants is at the core of the American narrative. But in 1924, Congress instituted a system of ethnic quotas so stringent that it choked off large-scale immigration for decades, sharply curtailing arrivals from southern and eastern Europe and outright banning those from nearly all of Asia. In a riveting narrative filled with a fascinating cast of characters, from the indefatigable congressman Emanuel Celler and senator Herbert Lehman to the bull-headed Nevada senator Pat McCarran, Jia Lynn Yang recounts how lawmakers, activists, and presidents from Truman through LBJ worked relentlessly to abolish the 1924 law.

Through a world war, a refugee crisis after the Holocaust, and a McCarthyist fever, a coalition of lawmakers and activists descended from Jewish, Irish, and Japanese immigrants fought to establish a new principle of equality in the American immigration system. Their crowning achievement, the 1965 Immigration and Nationality Act, proved to be one of the most transformative laws in the country’s history, opening the door to nonwhite migration at levels never seen before—and changing America in ways that those who debated it could hardly have imagined. Framed movingly by her own family’s story of immigration to America, Yang’s One Mighty and Irresistible Tide is a deeply researched and illuminating work of history, one that shows how Americans have strived and struggled to live up to the ideal of a home for the “huddled masses,” as promised in Emma Lazarus’s famous poem.

The book club will be held via Zoom.

There are limited copies of One Mighty and Irresistible Tide available for registered participants.

To receive updates and the Zoom link for participation, register below. Please note on your registration form whether you will need to borrow a copy of the book. (If you've already read the book or have your own copy, you are welcome to join the discussion as well!)