Finger Lakes Library System will be undergoing an internet provider change on Wednesday, December 7 from 9:00 until 11:00 am. During this time, patrons will not be able to search the online catalog, access their accounts, place holds, or connect to the TCPL WiFi. Access to the OverDrive/Libby digital download service will not be affected. Thank you for your patience! 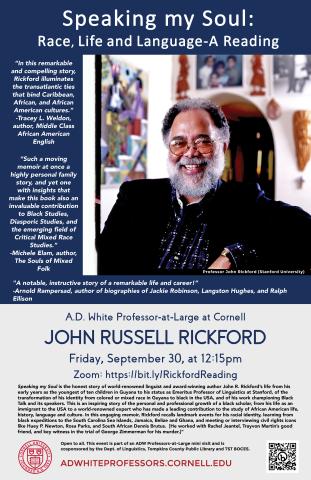 Speaking my Soul: Race, Life and Language – A Reading

This event is cosponsored by the Dept. of Linguistics, Tompkins County Public Library and TST BOCES.

Speaking my Soul is the honest story of world-renowned linguist and award-winning author John R. Rickford’s life from his early years as the youngest of ten children in Guyana to his status as Emeritus Professor of Linguistics at Stanford, of the transformation of his identity from colored or mixed race in Guyana to black in the USA, and of his work championing Black Talk and its speakers.

This is an inspiring story of the personal and professional growth of a black scholar, from his life as an immigrant to the USA to a world-renowned expert who has made a leading contribution to the study of African American life, history, language, and culture. In this engaging memoir, Rickford recalls landmark events for his racial identity, learning from black expeditions to the South Carolina Sea Islands, Jamaica, Belize and Ghana, and meeting or interviewing civil rights icons like Huey P. Newton, Rosa Parks, and South African Dennis Brutus.  He worked with Rachel Jeantel, Trayvon Martin’s good friend, and key witness in the trial of George Zimmerman for his murder.

“Such a moving memoir at once a highly personal family story, and yet one with insights that make this book also an invaluable contribution to Black Studies, Diasporic Studies, and the emerging field of Critical Mixed Race Studies.”
-Michele Elam, author, The Souls of Mixed Folk

"A notable, instructive story of a remarkable life and career!”
-Arnold Rampersad, author of biographies of Jackie Robinson, Langston Hughes, and Ralph

About John Rickford
John Rickford is a leading sociolinguist and world-renowned expert on African American Vernacular English (AAVE) and the study of linguistic variation and change.  He is considered one of the towering figures in the linguistic and historical study of vernacular language in the African diaspora.

Rickford is Professor of Linguistics emeritus and the J.E. Wallace Sterling Professor of the Humanities, Professor of Education (by courtesy), and a Bass University Fellow in Undergraduate Education at Stanford University.  He was named as an A.D. White Professor-at-Large (ADW-PAL) at Cornell University in 2017. His appointment runs through 2023. This event is part of an ADW-PAL mini visit and is cosponsored by the Department of Linguistics.

Among his numerous honors, Rickford was the President of the Linguistic Society of America (LSA) from 2015-2016, from which he was recently awarded the best paper in Language 2016 Award.  Since 2017, Rickford has been a member of the American Academy of Arts and Sciences and was elected to the National Academy of Sciences in 2021. And in 2022, he was elected as a Fellow of the British Academy.

About the A.D. White Professors-at-Large Program at Cornell University

The Andrew D. White Professors-at-Large (ADW-PAL) Program at Cornell University has been called one of the truly imaginative projects in American universities, bringing a steady stream of the world's foremost scholars, thinkers, and artists to campus to engage with the Cornell community in multiple forums. The ADW-PAL Program was established in celebration of Cornell’s first centenary, and named in honor of its first President, Andrew Dickson White, from whom the idea originated.

Currently, any one time, up to twenty outstanding intellectuals of international distinction hold the title of A.D. White Professor-at-Large. They are regarded as full members of Cornell faculty and are welcomed as lifetime members of Cornell’s academic community. Being named an A.D. White Professor-at-Large ranks among an academic's most eminent distinctions and honors.