Odysseys: Ithaca Writers on Exile, Wandering, and Searching for Home 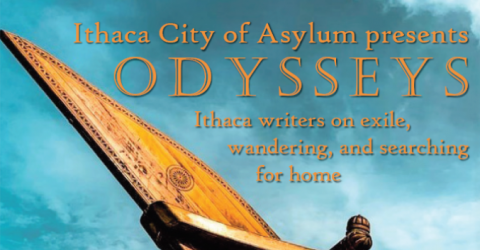 Odysseys: Ithaca Writers on Exile, Wandering, and Searching for Home

A reading series presented by Ithaca City of Asylum

Homer’s Odyssey recounts the adventures of Odysseus, king of Ithaca, as he seeks to return home after the Trojan War. In four monthly readings, pairs of Ithaca-based writers provide their take on the theme of odysseys, from the physical to the intellectual to the emotional. The series is organized by Ithaca City of Asylum, an all-volunteer group that offers refuge to imperiled writers from around the world.

Sorayya Khan is the author of the novels Noor, Five Queen’s Road, and City of Spies, which received the Best International Fiction Book Award from the Sharjah International Book Fair. She is the recipient of a U.S. Fulbright Research Grant, a Malahat Review Novella Prize, and a Constance Saltonstall Artist Grant. Her work has appeared in Guernica, Longreads, The Kenyon Review, North American Review, Journal of Narrative Politics, and other publications. She lives in Ithaca, New York, where she is at work on a memoir.

Raza Ahmad Rumi is director of the Park Center for Independent Media at Ithaca College and visiting faculty at Cornell Institute for Public Affairs. He is the author of Delhi by Heart: Impressions of a Pakistani Traveler, The Fractious Path: Pakistan’s Democratic Transition, Identity, Faith and Conflict, and Being Pakistani: Society, Culture, and the Arts. He co-edited a volume of essays entitled Rethinking Pakistan that was published by Anthem Press in September 2020. Raza was Ithaca City of Asylum’s writer in residence from 2014 to 2017.